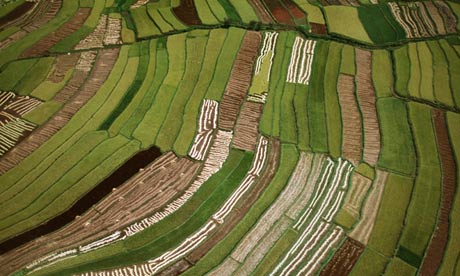 The idea that a simple grain like rice could change the world may seem far-fetched. But as a growing population and climate change put pressure on a hot, hungry planet, rice is playing an increasingly important role.

Rice is a major source of calories for half of the world’s population, and how rice is grown affects yields and affects the environment. Irrigated rice is normally covered with water. Flooding rice paddies suppresses weed growth, but it also uses enormous quantities of water and increases methane emissions when plant matter decomposes in flooded fields.

Twenty-five years ago small holder farms in Madagascar began growing rice using a methodology that doesn’t flood rice paddies continuously. With aerated soil, rather than flooded fields, farmers plant single, young seedlings directly into rows along with nutrients. The rice produces deeper roots and since the field isn’t flooded, the roots of the plants don’t suffocate. The result is stronger root and larger plants that produce heavier grain. And, in addition to using less water, the method requires less land preparation and fertiliser, although more weeding is required.

Growers produce more grain per hectare, conserve water resources, and create fewer environmental impacts. The system has spread from farmer to farmer, and 2.5 million of them in 50 countries have adopted these methods.

Now, a California-based company, Lotus Foods, is promoting this agriculture method, called the system of rice intensification (SRI) by providing farmers access to a global marketplace. Branded under the More Crop Per Drop label, the company sells six varieties of SRI-grown rice, including Madagascar Pink Rice. “Flooding rice paddies uses a third of our planet’s freshwater resources,” says Caryl Levine, co-owner of Lotus Foods, adding that the agriculture business doesn’t like this method because “there is nothing to buy and it is so farmer friendly.”

According to Olivia Vent, SRI liaison at Lotus Foods, the rice is better for the planet because it uses 50% less water and 90% less seed, yet results in up to three times conventional yields. The SRI method improves root growth and enriches soil, she says.

Lotus foods began by importing 20 tonnes of SRI-grown rice from Cambodia in 2008. Now the company imports 200 tonnes in the Cambodian supply chain and nearly the same amount of SRI-rice from Indonesia. Imports from Madagascar are fragile, Vent says, due to political instability and imports of pink rice are substantially lower.

So, is that the end of flooded paddy fields?

Lewis Ziska doesn’t think so. Ziska is a plant physiologist at the US department of agriculture’s Agriculture Research Service in Maryland. He says that scientists have not been able to replicate the yields claimed by those who developed the SRI methods. Still, conserving water resources and reducing methane emissions is critical for a changing climate, he says.

Vent of Lotus Foods says the environment is protected through the SRI-growing methods because the rice fields require no synthetic chemicals, which often makes its way into water systems. “So often, the water flooding the fields is connected to natural habitats. The water wasn’t getting into those places and was hurting plants and animals of the forests.

Vent adds that in Vietnam, fish life has come back in areas surround rice fields, and fishing has since become an important cash crop and nutrition source.