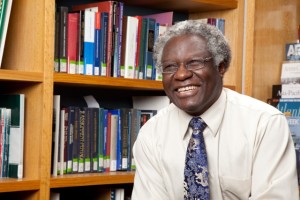 As a Harvard international development professor, Juma stakes out his territory on policy and innovation, sometimes in provocative ways. In an article that appeared in The Guardian, he argued that biotechnology skeptics “are wrong to dismiss GM” crops and ignore their potential. He writes, “Biotechnology sceptics have a right to question the role of biotechnology in global food security. But they are wrong to ignore the growing evidence of the potential contributions the biotechnology and new challenges such as climate change that require new technological responses.”

Whether you agree with him or not, Juma’s work on shaping policy is impressive. He has long taken the position that food security and economic development are inseparable. A native of Kenya, he has found prominence as an international authority on applying science and technology to sustainable development, including work with the United Nations (UN) and the African Union.

In my latest article on Future Food 2050, I interview Juma about why most African nations have eyed biotechnology warily. He believes that educating countries about genetically modified crops is important as more evidence becomes available about the technology’s safety and potential benefits. A recent report from the Alliance for a Green Revolution in Africa (AGRA), for example, suggests that “there is growing public opposition to GM crops in Africa that is best described as a fear of the unknown.”

As a boy growing up on the shores of Lake Victoria in Kenya, Harvard international development professor Calestous Juma noticed a thing or two about innovations designed to bring more food into his community. He noticed, for instance, that the fishermen were always tinkering with new ways to trap fish while his father, a carpenter, would build the traps. He also noticed that his grandmother, a peanut grower, and other farmers who grew traditional crops such as sweet potatoes struggled with ways to increase production beyond simply planting the best quality seeds and tubers.

That childhood curiosity helped lead Juma down a path to prominence as an international authority on applying science and technology to sustainable development, including work with the United Nations (UN) and the African Union. Now he is looking ahead to intensifying food production sustainably. “The rising concern over the impact of climate change on agriculture will significantly shape the way Africa approaches agriculture,” Juma says. “It is no longer possible to rely on folk knowledge as the key guide for farming.”

Ultimately, Juma’s message is that innovation, technologies, and policies to improve agriculture and economic development are critical to Africa’s future and no single idea should be overlooked.

For more on Juma and why he believes policy-making is a learning process, go to www.FutureFood2050.com for the complete story. You can also click on this link to view more from Juma http://www.youtube.com/watch?v=eWDiwi8YKvU.