In the processing department of a fish supplier in Alaska, the director of purchasing strategy for Bon Appétit Management Company, a California-based food-service company, noticed chunks of salmon left on the skin after workers boned and filleted the fish for market. “What are you planning to do with these?” she asked the fish processor, who told her the remnants would be crushed and thrown into Prince William Sound. Seeing opportunity where others saw waste, she offered to buy the small pieces, called trim, if the supplier shipped them to San Francisco.

Once there, the trim was delivered to chefs employed by BAMCO, who were challenged to do something innovative with it. They created salmon burgers, salmon pad thai, salmon tacos and a wide variety of other meals.

The 26-year-old company, which serves 150 million meals per year to corporate employees, university students and museum goers in 32 states, has a long history of leadership in sustainable practices. Eliminating food waste like trim is just one example. Each of its 500 locations is under the direction of a chef who is required to buy at least 20 percent of produce from suppliers within 150 miles, a mandate that began back in 1999 when Maisie Greenawalt, vice president of strategy, established BAMCO’s Farm to Fork program. Another program, the company’s Low Carbon Diet, asks chefs to cut use of beef companywide by 33 percent, cut the use of cheese by 10 percent and eliminate airfreighted produce. And BAMCO was among the first food service companies to address the issues of antibiotic overuse, sustainable seafood, humanely raised meat and eggs, and farmworker welfare.

By empowering chefs to independently support sustainability, BAMCO is attempting to create the kind of food system it wants to see in America, rather than proceed with the industrial food system’s status quo. “How can we use every single part of our business to create that food system?” asks Greenawalt.

“There is no food service company that is close to Bon Appétit’s leadership on animal welfare issues.” – Josh Balk, director of corporate policy for the Humane Society’s farm animal protection campaign

But BAMCO’s long history has made it a leader in such efforts. “There is no food service company that is close to Bon Appétit’s leadership on animal welfare issues,” says Josh Balk, director of corporate policy for the Humane Society’s farm animal protection campaign. “Specifically, their commitments of switching 100 percent of their eggs to cage free, eliminating gestation crates in their supply chain and sourcing … animal products from farms that pass third-party certification programs from credible animal-welfare organizations.” By 2015 at least 25 percent of the company’s meat and eggs will be from sources whose humane practices have been verified by four such organizations.

“We put a stake in the ground, and we want to make it a reality of what we promised,” says Greenawalt, adding that the company still has a lot of work to do to meet its 2015 goal of procuring pork raised without gestation crates. “The problem is, we don’t have enough suppliers lined up,” she says. “We are making promises faster than producers are making changes — and we are even willing to write the bigger check!”

While most of the company’s efforts have been in support of local producers, BAMCO’s focus is also international. When company chefs requested tilapia, it enlisted the help of Monterey Bay Aquarium Seafood Watch to find the only tilapia producer in China producing the fish sustainably (less than 5 percent of tilapia is produced in the U.S.). Despite its red list of all tilapia from China at that time, the Seafood Watch program gave BAMCO the green light as a commercial buyer. Why? “Because it would send a signal to everyone else in China that if you change your practices, you can get more sales,” says Greenawalt. “So we buy from one particular producer in China as a way to create a carrot incentive for the other producers to change their practices to be more environmentally preferable.” As a whole, China’s tilapia production has improved since the time BAMCO first started buying from its sustainable producer. Now tilapia from China is no longer red-listed but labeled a “good alternative” by Seafood Watch.

Large-scale factory farms are the company’s next target. “We’ve always supported small, local growers, but how can we change the big growers?” asks Greenawalt. “They’ve gotten away with a lot by being nameless and faceless to most consumers.”

Though not the biggest food-service company, BAMCO looks to punch above its weight, so to speak, and create change. “We are always pushing and striving to think of ways to leverage our brand and purchases to exert more pressure than our size commands, in order to make changes in the supply chain,” Greenawalt says. Still, Greenawalt understands that success in any area of food will only come if the product is something consumers will want to eat. “Don’t think we are so focused on sustainability that we forget that,” she says.

This story originally appeared in Ensia 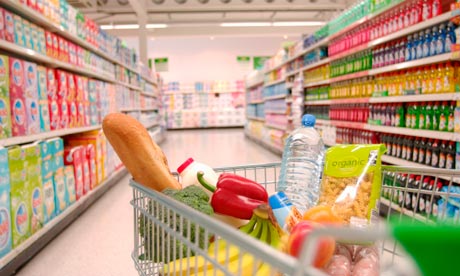 In 2008, students at the University of Texas at Austin left an average of just under six ounces of edible food on their lunch plates, which food service workers measured during a five-day waste audit. A year later, after identifying reasons for the waste and implementing programs to reduce it, such as better quality food, sample tasting and getting rid of trays, students reduced food waste by 48%.

According to Jason Pearson, of the Sustainable Purchasing Leadership Council, reducing food waste in higher education is one of the major ways sustainable purchasing can help improve the planet.

Waste seems the unlikely focus of a purchasing group, but as Pearson sees it, the goal of his organization is to “buy less and buy better.” The Council officially opened for business this summer. It has been five years in the making and is closely modeled on the United States Green Building Council’s LEED certification program. By developing a system of guidance for best practices, measurement and recognition that can be applied to a wide array of organizations, buyers can be much more strategic in their sustainable purchases, Pearson says.

Take the example of higher education. Of all the goods and services they purchase, 65% falls into five categories: electricity, food, fuel, agriculture and food products, and waste services. Roughly 85% of the environmental impacts in their supply chain can be attributed to those five categories, Pearson explains. Reducing food waste also reduces the social and environmental impact of those purchases in at least three categories: food, agriculture and food products, and waste services.

Outside of higher education, hotels chains, public institutions, and corporations face similar challenges. These challenges reflect those the green building market encountered in the 1990s before the LEED program offered sweeping guidance to builders and developers. With a flood of new products and services making green claims, and both buyers and marketers are increasingly frustrated by the bounty of options. People need clarity around what claims are legitimate.

Universities and colleges have been at the forefront of sustainable purchasing, along with federal, state, and local governments and Fortune 500 companies, because their sustainability goals tend to track carbon emissions of their supply chains. By zeroing in on each of the purchasing categories that contribute most to greenhouse gas emissions, purchasers can become more strategic in how their purchases affect the environment.

“The main thing that the SLPC can offer is a macro level view of what methods exist to reduce social and environmental impacts through purchases with a combination of life-cycle analysis and eco-label standards, and to help people focus on what matters most.”

“At the moment we’re sort of accidentally buying greener products without necessarily stepping back and saying, ‘What are we trying to do?’ And what we are trying to do is reduce the environmental impact of organizations through the way people buy. There’s a lot of interest in this area with a plethora of approaches, and none of which necessarily addresses ‘Where can we reduce the impacts the most?'”

Siddiqui says that by identifying the hurdles to making sustainable purchases, suppliers can have a clearer market signal on which products have the least impact on the environment and provide better pricing.

“We’re now in the zone of independent creation where the City of Portland has one approach, one position and one methodology of green procurement, the federal government has another, Target has another, JP Morgan has another, and and so on, so it’s not efficient both with the intellectual power going to independent efforts and by connecting the value chain.”

Over the past five years the Council has been developing a system of best practices that can be applied to a purchasing program and result in a certification. Like the LEED certification program, the program is trying to make buying green an easier task for procurement professionals in governments and large institutions, as well as service providers such as hospitals, hotels, banks, airlines and schools, which together account for about 75% of all consumer spending.

Between 6,000 and 7,000 procurement professionals control the vast majority of institutional buying. Their purchasing power, if well coordinated, has the potential to drive sweeping change in greening supply chains – a far more feasible task than trying to change the mindset of six billion people.